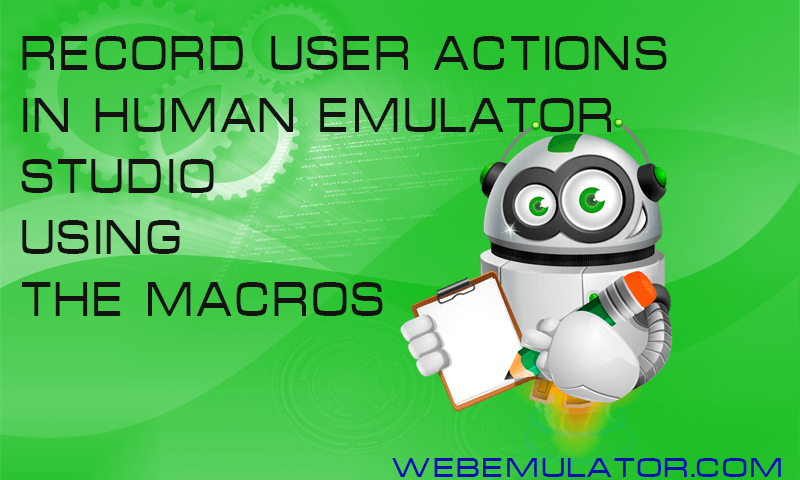 In the article we in detail explain how you can use the Macros in the Human Emulator Studio.

One of the first tools built into the program, which was added to simplify the creation of scripts, is the Macros.

How does it work?

When you enable the Macros, your actions in the browser are recorded, such as going to pages in the browser, all possible clicks on elements, and entering data in various browser fields. In this case, there are two modes of operation, this is when all actions are recorded via mouse control or using functions for working with individual objects.

Before you start recording, you need to configure the Macros. The Macros settings are located in the General settings of the program, the Macros tab.

Now let’s go through all the settings.

In other words, when you select these settings, your code will look like this:

Check boxes Full mouse emulation and Full keyboard emulation. When you select these check boxes, functions will be substituted that fully emulate mouse movements and keyboard input to the active window. When script run in full emulation mode you will not be able to use your computer or work in multithreaded mode, as any actions with the mouse cursor or using the keyboard may interfere with the script.

In the script code it will be like this:

The group of radio button Catch events. In this group, exhibited the device of the action which will be to record a Macros.

When you select the Mouse, all actions in the script will be recorded as actions with the mouse.
In the script it will be written like this:

When you select the Keyboards option, all input actions will be recorded via the $keybord object
in the script, this will be

If the item Click on elements is selected, then writing to the script will go through the objects of these elements.
In the script :

The check box Create new script. If you select this check box, a new script will be created when you start recording the Macros and all actions will be recorded in this script. If the check box is removed, then the entry will go to the current script, in the place where the carriage is installed in the editor.

Use the Actions menu to enable the Macros.

Slightly change the Macros settings and disable the check boxes with focus, mouse movement and pause. And instead of Enter, press the Google search button.
We get the script like as:

Features of working with the Macros.

As it is not difficult to notice, the work in the Macros goes through the Dom Interface of objects. That is when you get the element itself you can do various actions with it such as:

And all these actions can be performed with any element, be it a anchor or a button. You can also get a page element as an interface using the same functions for all page elements:

In other words, as in other functions, we work with page elements by several parameters, such as name, id, sequence number, and so on. All this can be viewed through the element inspector or use the same context menu.

The macros is useful when you need to write simple scripts or some parts of scripts, when you can’t define some elements with other tools. At the same time, you should understand that the scripts recorded by the Macros will still have to be edited, since we use the Macros to record actions with page elements. You can add commands that are not related to page elements using another tool, the code Helper.